Today we decided to head to Universal Studios Osaka!

We weren’t sure how crowded it would be, but the website of Universal told us they expected a crowd rating of 40 out of 100 points with 100 being “I can’t move!” so we took our chances.

Here we are in front of the gate: 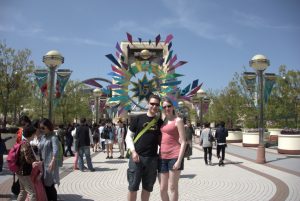 Now we just needed to buy two tickets. Rhonja picked a line and at that point I should’ve guessed we had the worst line, since that also always happens at home at the supermarket. History repeated itself since everybody in front of us wanted to buy express tickets which took ages.

Finally we were in and headed towards the park itself. 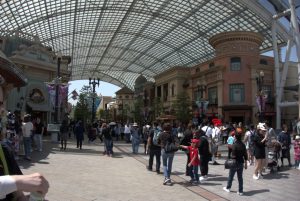 Halfway there we were greeted by Snoopy, so we had to get our picture taken. 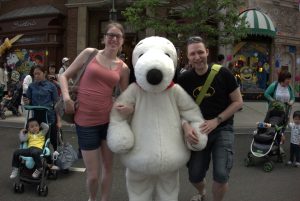 The first ride we did was Spiderman. We weren’t sure if it would cause any problems since my arm was still wrapped in bandages, but luckily we could enter without problems. The indicator at the entrance told us the waiting time was arround 40 minutes, but after just 20 we were already comfortably sitting in the ride (which was great)

After this we headed towards Jaws, but it was better last time. In this ride there is a captain steering your boat, but the lady we had this time was kinda off time at every shark encounter. (she would “shoot” at Jaws but the sounds would play 3 seconds later). Still fun though. Also here the time indicated was way more than the actual waiting time.

We now headed to the Harry Potter part of the park, which was a lot less crowded compared to last time. We  could actually enter the shops without waiting for 2 hours! Even went on the Hippogriff since there were not that many people. When we were at the front of the line we were taken aside but had no clue why. When the next train arrived we got to sit in the front since we were really tall and that cart provided more space 😀

Now we wanted to go on the Hollywood ride Rollercoaster, but the lady at the entrance wouldn’t let me on because of my bandages. I told her I was doing pretty much okay but still no luck. I thought it would be fine to take it off so we could both enjoy all the rides, but before we did that we went to the children’s section of the park to ride the flying Snoopy. Now that ride isn’t that spectacular since its directed at small children, it’s just a cart which you can fly a bit up and down, but the staff there wasn’t really sure if I could ride it with my arm… Luckily we managed to get on anyway. 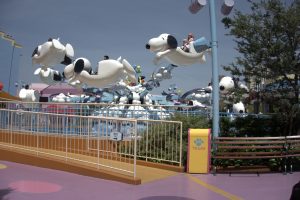 (also note the “ladies” in the right cart)

At that time we removed my bandages so we could enter a real Rollercoaster. Lucky for me it was doable, still can’t really stretch my arm all the way without pain but it was a risk I was ready to take.

Again only waited half the indicated time and had a blast! We got some nice views from the coaster since it goes through half the park and pretty high up.

Time for lunch! Since I already went here 2 years back I knew just where to go: Jurassic Park! Arriving there we were greeted by three raptors which almost slapped us in the face with their tails several times. 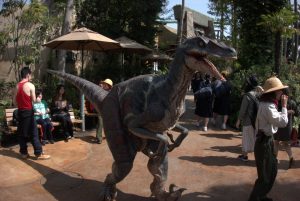 And I don’t think we could’ve gone for a better lunch than a turkey leg with some beer. 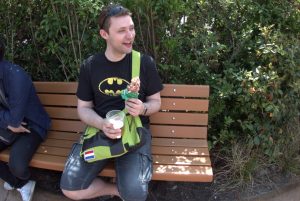 After lunch we rode the “Jurassic Park the Ride”, which is a kind of boat tour but with some huge splashes. After that we decided to get into the “singles” line for the newest attraction of the park “the flying Dinosaur”. The singles line let’s you skip almost the entire line, you are then used to fill up the gaps in the carts. When we were let into the singles line, we were suddenly called back by the staff. They wanted to check if we werent too tall for the ride… We were put in front of a pillar which had the maximum height indicated, and then someone from the staff grabbed a small step to check if we were indeed shorter than 1.98m, luckily we were! So we could get back on the singles line. 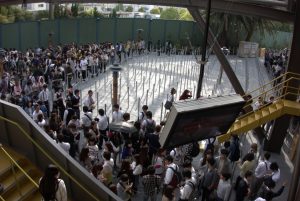 (we just took a path to the right which skipped this entire section, which even went below the left stairs as well.)

Here we had our longest wait in the entire park, a whopping 40 minutes (of which 10 were because of ride inspection) and it was absolute worth it! We even got to sit next to each other even though we got on the singles line. 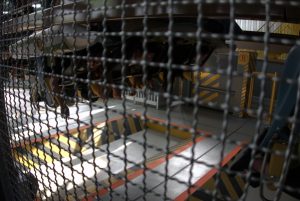 As soon as your locked into your seat, it tilts 90 degrees so you’re faced downwards. You really start to wonder if the locks can hold you at this point, but it’s absolutely the best Rollercoaster we’ve ever been on!  Especially loops are awesome, since then you’re falling upside down, heads first, towards the ground.

After this amazing experience we traveled to the future in the Back to the Future ride. (although the 21st of October 2015 isn’t really the future anymore) This ride was kinda terrible, we both got a bit nauseated from the rough movements and crappy video quality. But seeing the ride was made before Rhonja was even born we could’ve expected this.

Lastly we headed back to the Harry Potter part to go on the last ride we still had to do before we had done everything in the park. That ride was okay but nothing special.

After this we called it a day and headed towards the exit. 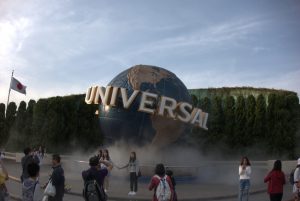 Overal we had an amazing time! We did receive some pictures of a snowy Netherlands but in Osaka we had a comfy 25 degrees Celsius (and still most here people were wearing long trousers and sometimes even sweaters and woolen caps!) Also we can’t complain about the waiting times, I think the average was about 25 minutes, so we picked a great day to visit the park!

We absolute recommend a visit if you are near Osaka (but do check the crowd forecast on usjinfo.com). Coming Friday the “golden week” starts and it will probably be one of the worst days to visit if you actually want to get on some rides…)

Tomorrow we’ll be heading to Kyoto!