The weather improved some though today was a bit chilly. But since we still had some key places to visit we took out the bikes again to head towards the Nintendo buildings here in Kyoto!

First we visited the old headquarters of Nintendo. Nintendo used to be a card game producer before they went into business with video games. 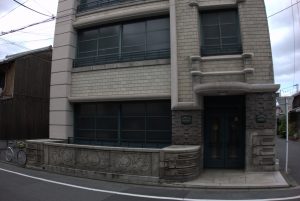 And though obviously we wanted to pay a visit to the current buildings as well, it was more efficient to head towards a nearby temple, Tofukuji, first. It was pretty impressive though to be fair they all are. 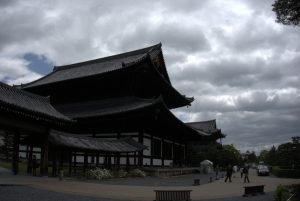 After which we also visited the Fushimi Inari Taisha. That one is pretty huge and a real tourist attraction. There’s this lengthy path of torii (gates) which is fun to walk along, except it was kind of busy so we didn’t walk all of it. People can build their own gate there with their family name on it. Assuming you have a lot of spare cash you really want to get rid of. Gates come in all sizes but you can also buy and place a gate about the height of your lower arm if you’re a cheapskate. That costs only between ¥10.000 – 46.000 (€80 – 375), a small price to pay to please Inari. 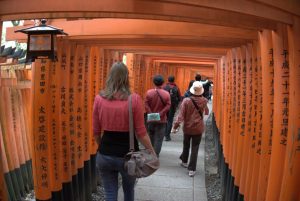 Since there were plenty of food stalls available and it was lunch time we ate some rice balls wrapped in bacon and also grabbed a Taiyaki filled with custard (it’s a fish shaped kind of cake). It was time to head to the current Nintendo Headquarters! 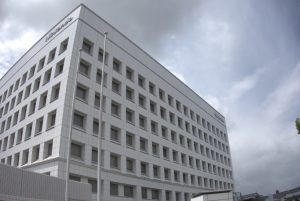 Which really was just a kind of boring white block. We got to stand outside the gate of the main building for a bit before we headed to the Nintendo development centre. 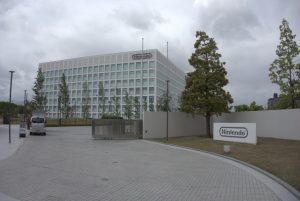 …Which was another white block where we got to stand outside the gate for a bit. It was no surprise really, but it’s still nice to pay a short visit since they do make many wonderful games.

We headed towards Kyoto station next because it’s a bit more central than the Nintendo buildings but also because that’s where you can best view Kyoto tower, plus it’s a great building in its own right!

Before we got there we walked into the Big Camera and strolled around for a bit. We found some really cool and cheap games for the Nintendo 3DS. (Monster Hunter 4G and a Tales of game, which both were around €2!)

Kyoto station is really, really high, thankfully with escalators (almost) all the way providing a pretty epic view of the city below. They had a rooftop garden at the top which is apparently a big thing there to help keep the city cool with insulation and special things. It was called the “happy terrace”. 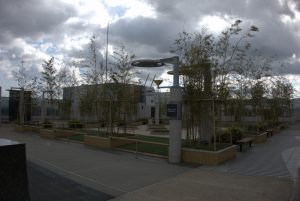 But the tower was visible only from the skyway, a walkway at the front of the station. 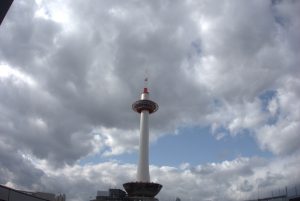 After this we visited the yodobashi store. They’ve got pretty much everything and it was fun to look around. They had a lot of gacha machines, and with a lot we mean A LOT!

We didn’t have enough time to see all of the store though but we did manage to get lost a little trying to find our exit for the bike parking lot. It turned out Marcel made us search on the wrong floor (it really was that huge on every floor!)

When we finally found our bikes again we paid a short visit to Nishi Honganji. Unfortunately we couldn’t enter the building itself since they were closing already, but luckily we snagged a few great pictures.

Afterwards we went back to the hotel, dropped off our bikes and headed to a nearby Coco to have some curry again!

After dinner we strolled to the nearby shopping center, visited several arcades to check out the crane machines, and eventually wandered back to our hotel.

Tomorrow we’ll be travelling to Takayama!