Fun fact from yesterday: we checked the Universal Studios website what yesterday’s crowd rating actually was. It had 23 points, which is the lowest rating in years for a sunny day! We sure were lucky!

Today after breakfast we checked out of our current hotel and took the train towards Kyoto. Fun fact, when a train is leaving the station one of the conductors looks out of the window to check if everything is fine : 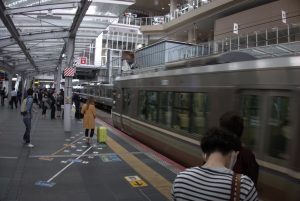 Arriving at Kyoto, somewhere in the station we ran into several awesome Domokun displays. The best one was with several Domokuns dressed as Batman!

Arriving at our hotel we couldn’t check in yet so we dropped off our luggage and decided to head to Nara for the day. The weather wasn’t that great but the temperature was still nice.

The train to Nara was great. We went into the firstmost cart which was the least crowded. In there we could even change our seats with a handle to make them face back- or forwards. But the best thing was that we had a great view the entire trip: 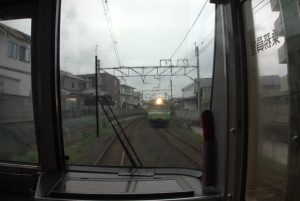 The entire cabin of the conductor was see through, so we could see in front of us the entire trip, which was pretty cool.

After 45 minutes we arrived in Nara, which is also filled with deer. Although they’re bit more rude here. 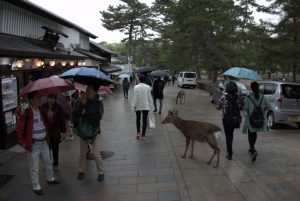 Just a few steps later we ran into the Tōdai-ji temple which was really impressive.

And inside we found the world’s largest bronze statue of Buddha Vairocana. 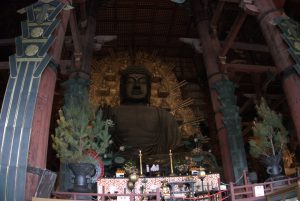 Afterwards we headed back to the station since the weather wasn’t that great. Underway we found a “cute cat store”, for which we had to go up several stairs and eventually entered what looked like someone’s home. In there he had one very small room with several cloths and phonecases with designs of cats on it, which was a bit weird. After a minute we kindly thanked the owner and left again to our train.

Once we were in Kyoto again we decided to immediately make the most important visit yet, to the Kyoto Pokémon Centre! 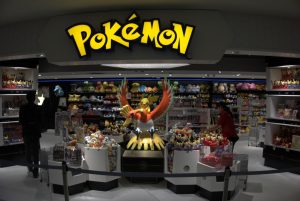 (we already visited the Osaka one, but hadn’t made any purchases yet. This time we did and eventually went home with the following loot: 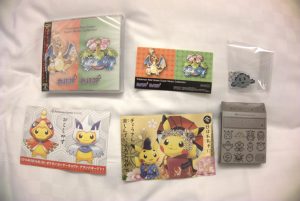 From top left: 4 CD’s with music/sounds from the first Pokémon games (in Japan they had Red & Green instead of Red & Blue. Stickers which came with the CD’s. A pendant of the first Pokémon games (which was random but we got lucky and got a cool one). Two cards which we got for purchasing something at the store (The Kyoto location was opened last month). The box in which the pendant came in.

Yes, geeky. But awesome! Afterwards we went for dinner in a place we passed while heading towards the Pokémon centre, but it wasn’t that great so I won’t bother to write anything about it.

While writing this post we were watching some weird Japanese TV program where they spent a lot of effort and time on really innocent pranks. (it was hosted and presented to adults) 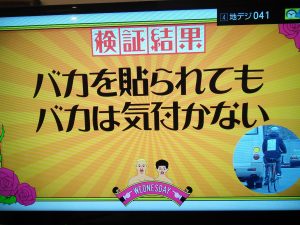 They stuck a sign on someone’s back saying “Baka”, which means Idiot. Afterwards they followed him for hours and laughed their asses off…

Still fun to watch, although mainly because it was really silly. That’s all for today though!